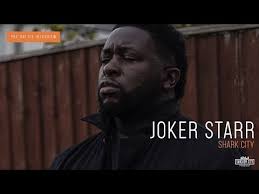 His parents (hailing from Sierra Leone) brought him up on Calypso, Soul and Jazz and it wasn’t until 1998 that Joker Starr discovered an interest in Hip Hop. His interest soon developed into a passion as Kebbie began to pursue his own ambitions as an MC.

The nickname ‘Joker’ came from a cousin as a result of Kebbies relentless clowning around and irrepressible sense of humour. It also speaks in no uncertain terms of his musical style. He effortlessly references past and present pop

culture turning everyday icons on their heads with a ‘no holds barred’ approach to rhyming. Along with the trademark humour, Joker Starr’s music is often very concept driven. The conscious themes are not always obvious, in  fact they often surprise, emerging out of lyrics that appear to operate on a certain level but then with a deft twist are revealed to go much deeper. He refers to himself as a lyricist, having not fully comprehended the depth of Hip Hop until he began to articulate his own ideas and experiences. A great believer in the importance of individuality, he stopped listening to Hip Hop while searching for his style determined to stay true to himself and not lose his voice in the multitude of existing voices.